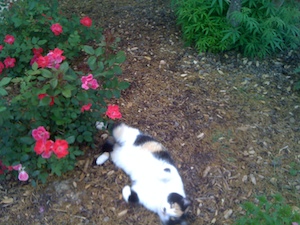 I come from a great family that I love and enjoy but truth be told not one person likes to garden or work in their yards except me.  In fact, out of the whole family, brother, sister and in-laws, I think I’m the only one who likes to get my hands dirty.  But not to worry, if you don’t have two legged family members that like to garden. Well then just go to the next best option…four legged family members. As you can see Callie, loves to be in the garden, but how much help is she really?  Not much, but at least I am entertained and have some company while I do my tasks for that day.  Of course cats have a mind of their own and rarely end up where you want them but for today she is busy sunning and smelling the roses. 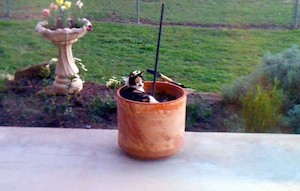 Later in the day as I sat on the back porch, I noticed Callie sunning in a different spot.  I think this is about as active as she gets unless a bird decides to get a little too close and then you can just see the hopeful plans she has of becoming  hunter of the year.  Callie likes all things that pertain to the garden and gives little thought to whether she is helping or hindering. It’s a pretty safe bet that nothing is going to grow in this pot.   So I think I will skip planting something there this year. 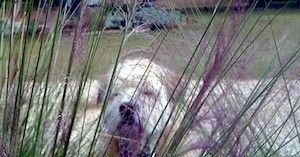 Now Dudley has an altogether different attitude when it comes to gardening.  He is usually very close as he needs to know what’s going on. Being the protector of the universe he likes to make sure that he is making a safe environment for me to work in.  Of course he likes to do all this with as much discretion as possible.  After all being the dog of The Garden Sleuth, he’s learned a trick or two.  His detective skills are unequivocal at least for a dog.  He has a way of checking things out without being too obvious.  I can’t help but be proud of his ability to blend in.  Not bad for an amateur sleuth. 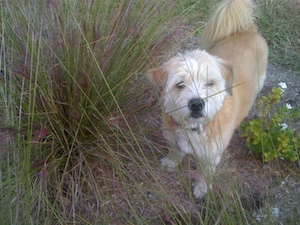 Making sure the garden is safe and without any major threat, now that’s a tough job. I get started on the task at hand and Dudley no longer feels like he has to stay under cover. He does not help much either but at least he provides some really cute photo ops. In the end I guess that is helping and it gives me a chance to take a break and take some pictures. And it makes me smile so the work ahead of me is less daunting.

I usually try to spend some time each day in my garden.  Sometimes its just watering or dead heading blooming plants and for all you newcomers to the garden world, dead heading is removing dead flowers from the plant, which encourages new blooms. 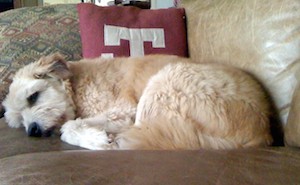 I really try to stay ahead of things, but sometimes life just gets in the way. When I can work in my yard, I feel like I have accomplished something that the world can see.

At the end of the day Dudley can also feel a sense of accomplishment and takes time out of his busy schedule to take an afternoon nap.  Which, if the truth be told, he spends about 70% of his time doing. 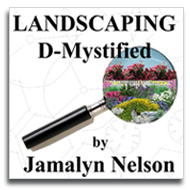